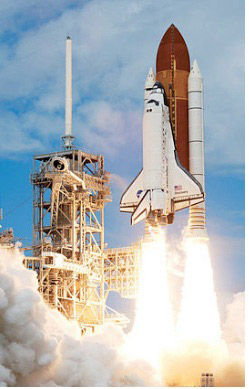 Up until the tragic loss of the Shuttle Challenger January 28, 1986 at 11:38EST, most Americans never would have ever considered a shuttle catastrophe. That day, America lost (7) astronauts, including our favorite school teacher from New Hampshire, Christa McAuliffe. It was also one of those few moments that at, exactly 11:38EST, America stood still in disbelief and completely stopped working. We were all shocked, including President Reagan, who he, and his wife, saw first-hand at the launch site in Florida. How could this happen? Who is responsible?

As a result of this disaster, NASA shutdown all shuttle launches, completing a detailed 33 month analysis of all procedures, processes and parts of the shuttle program to find out what the exact cause was with this horrific accident. It was found that the cause was “O-rings.” O-rings, a gasket used to seal the attachment between the booster rocket and the external fuel tank, failed, allowing high-pressured hot gas to get to the fuel 72 seconds into lift-off. The tanks and the shuttle exploded over the Atlantic Ocean off the east coast of Florida. It was also later found that some NASA engineers had warned of a possible failure with the O-rings because the rings had never been tested below 40 degrees Fahrenheit, much higher than the teens the launch crew was dealing with that unusually cold day in January 1986.

Unfortunately, our country has had a few more of those heart-stopping moments since that sunny, cold morning in Florida, including another shuttle catastrophe called Columbia in February 1, 1993.

What does this very sad example of a launch go so wrong compare with my business or product launch?

Unfortunately, although ours do not produce the tragic loss of life, all too often they produce the same failed results. In fact, I would side with NASA more than the business world, which has had an incredible record of successful rocket launches, much higher than most new ventures launched over the past fifty years.

What can we learn from NASA?

They are experienced at what they do. In fact, having been an approved supplier to the space shuttle program, I have seen first-hand that their engineering and project management ability is second to none, however, what they don’t have they get from the outside the organization. Which brings me to my second point; Egos are left at the door, meaning that their organizational goal is a successful launch not protecting the NASA organization. If they need outside help, they are smart and humble enough, to go out and get the experience where they see a short-fall. They will not fail.

Questions: Do you have the experience and ability in your organization to launch your new product or New Venture? Is failure an option?

Lives depend upon NASA’s preparation and attention to detail. A fault that caused disaster and now corrected by NASA. Now granted; most new launches do not also contain threats to life. But don’t they? What about the auto industry? Medical device industry? Pharma? Food processing? Etc. Every industry contains some exact product regulatory requirements mandated by law.

Questions: Are we ready to commit financial resources to an idea or an idea and a plan? Are we prepared? Have we completed a detailed market analysis? Do we know our competition? Strengths? Weaknesses? Have we correctly branded and positioned this venture correctly? Have we set accountability standards with each detail?

NASA never stops innovating. Every procedure, process and part on the shuttle goes through a complete, objective peer review to improve on the next launch. Nothing is sacred.

Questions: What are the standards for a successful launch? Can we quantify every aspect of the launch? What is success one month, one quarter, one year from now? Are we also innovating are new product?

NASA never quits until the launch is complete. Upon launch, I have never seen or heard of a NASA engineer sleeping on the job or guessing where the shuttle is at any exact moment. They are committed to the mission.

Questions: Are we in it until completion? Are we in it for the long-haul? Have we committed the resources until completion? All new ventures take on many twists and turns requiring complete focus through the “valley of death” but even more importantly; when the venture is in the growth phase. Are we scaling correctly? Remember the business adage “It is easier to choke to death than to starve to death” Therefore, the more we are prepared and experienced in managing growth correctly will determine whether we have the foundations to grow to the next plateau. Again, Successful launches don’t just happen.